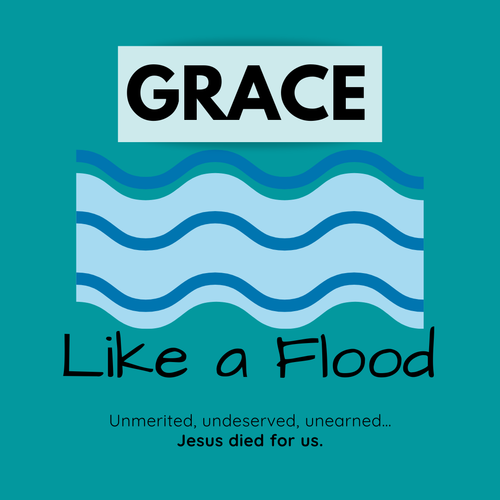 Grace.  “the free and unmerited favor of God, as manifested in the salvation of sinners and the bestowal of blessings.”; “the dimension of divine activity, that enables God to confront human indifference and rebellion with an inexhaustible capacity to forgive and to bless;” “the unmerited, undeserved, unearned kindness and favor of God.” -- Michael Todd

I simply love that last definition. Unmerited, undeserved, unearned… Jesus died for us. He suffered on the cross so that we could be saved. It is without question the most selfless act in the history of our world. And as a result of His pain, His anguish, we receive the most precious gift ever given- forgiveness, for all we’ve done and all we will do, provided we just believe in Him. And from that grace, God asks that as we grow in His love, we extend the same love and grace to all His children. Pretty simple, isn’t it? And yet, how many times have you felt aggravated, frustrated, and just downright angry at your spouse for something he/she did or didn’t do… and not given them the benefit of the doubt? How many times have you been upset about an unmet expectation that you never actually told them you had? Why is it that our most intimate earth relationships are often where we are the least forgiving, the most impatient, and the quickest to lash out?

My husband Jason and I have been through a lot these last several years. It’s crazy how the stress of chaos and difficulty has the power to chip away at your unity in marriage. In fact, isn’t it interesting that often times the relationship most impacted by stress is the one that should be a source of strength and renewal. There is no coincidence in that unfortunately. We live in a fallen, broken world and as a result of that, we have an enemy that seeks to destroy. And if I were looking to wreak some havoc in this world that God seeks to save, I absolutely would target those relationships that most mimic the love and relationship we can have with our heavenly Father. And honestly, we often end up making this task much easier than it should be. Over time, we focus less on the day to day of our significant other. We become absorbed in our own personal experiences and begin to take our spouse, their love, and our unity, for granted. I don’t think any of us intend to do this, but life distracts us, and we wander. Before long, we begin to harbor resentment, and the fact that they didn’t load the dishwasher the way we wanted, or put their tools away, or they used the last of the milk and didn’t put it on the list. These become our day-to-day interactions and build bitterness and walls in our marriage. Never mind when you pile on challenges with kids, custody battles, and health concerns. We allow ourselves to become easy fodder for the enemy to feast on.

Psalm 103:8 says, “The Lord is compassionate and gracious, slow to anger, and abounding in love.”

But what if, every day we paused instead, to be grateful for our spouse and to focus on the blessings they bring instead of always on the frustrations? What if, instead of being angry about the way the dishes were loaded, we just were thankful that they shared in the workload and lightened ours by doing it? What if we paused and remembered who we married; the reasons we chose to spend our lives together, and more importantly, the heart and character of our significant other? What if we simply extended them more grace, and instead of leading ourselves to negative feelings, we extended the same forgiveness and love that Jesus has given to us? “He has saved us and called us to a holy life- not because of anything we have done, but because of his own purpose and grace. This grace was given us in Jesus Christ before the beginning of time.” 2 Timothy 1:9

Friends, it is easy to allow the challenges in our lives and in this world to impact our response and our relationships. It is harder instead to focus on all the good and the beauty in those around us. And there is no more at-risk relationship than our marriage, and no easier target than our spouse. Let’s make war with the enemy and take away his ability to focus our attention on anger and dissatisfaction and instead, let’s look at all the gifts God has given us in our significant other. Let’s follow the example of Jesus and be quick to forgive, slow to anger, and extend that grace to our spouse, instead of taking it out on them. Let’s wake up every day and choose to focus on what we know to be true and good about our spouse. I know this, there is no one I would rather have by my side, than the awesome man God’s blessed me with in my husband. Daily, I want to choose to live my life, and my marriage, with the commitment to treat my spouse the way God treats us all, with His unending grace.

Grace Like a Flood
Pray Together
Christ at the Center